The Prague Castle, an ancient symbol of the Czech lands, is the most significant Czech monument and the seat of the head of the state. Most likely it was founded in the 9th century. According to the Guinness Book of World Records, the Prague Castle is the largest coherent castle complex in the world, with an area of almost 70,000 m2. It is a UNESCO World Heritage site and is comprised of palaces, ecclesiastical buildings, defence towers and other buildings of various architectural styles. The ceremony by the Castle gates takes place every hour. At noon it also includes a fanfare and the flag ceremony in the First Courtyard. Once inside the gates, you can visit the Cathedral of St. Vitus, Old Royal Palace, “The Story of Prague Castle” exhibition, St. George’s Basilica, Convent of St. George which houses the National Gallery, Golden Lane with Daliborka Tower, Prague Castle Picture Gallery, Powder Tower, Rosenberg Palace. You can also get a wonderful panorama view of Prague from the top of the Great South Tower of the Cathedral of St. Vitus. Another beautiful place to see is thePrague Castle Gardens.
(http://www.hrad.cz/en/prague-castle/prague-castle-tourist-information/visit-of-prague-castle.shtml) 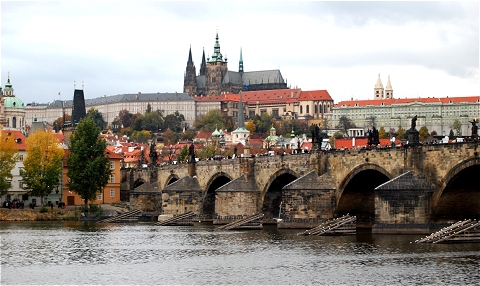 Many of these amazing sites are narrow and can be too crowded to comfortably visit as a large group. We therefore recommend that you to go through the Prague Castle interiors individually or in small groups. Enjoy it!

Charles Bridge is a 14th century stone bridge linking the two sides of Prague. This magnificent structure is one of the city᾽s finest attractions, and is the main pedestrian route connecting the Old Town with Small Quarter (Malá Strana) and Prague Castle.
King Charles IV commissioned the bridge. The foundation stone was laid in 1357. Charles IV᾽s favourite architect and builder, Petr Parléř, oversaw the majority of the work. For many years the only decoration on the bridge was a simple crucifix. But later, the Catholic desire for ornamentation resulted in 30 beautiful baroque statues. 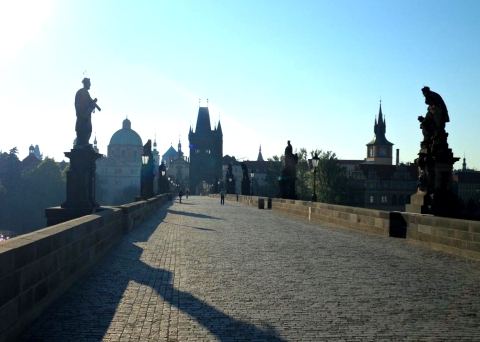 Being Prague᾽s heart since the 10th century and its main market place until the beginning of the 20th century, the spacious 1.7 hectare Old Town Square has been the scene of great events, both glorious and tragic. There are beautiful pastel-coloured buildings of Romanesque or Gothic origin with fascinating house signs. Some of the most prominent examples include the Kinský Palace, the House of the Stone Bell and the Štorch House. There are two very nice churches: the gothic Týn church und the baroque St. Nicholas Church. Turists might admire the Astronomical Clock or enjoy a panoramic view from the Old Town Hall Tower. Today, the Old Town Square offers visitors a number of restaurants, cafés, shops, galleries, and a tourist information office.

Completed in 1915 on the occasion of the 500th anniversary of the death of Jan Hus, the Czech Hussite reformer, the massive monument dominates the Old Town square. It shows two groups of people, a young mother symbolising national rebirth and the figure of Hus emphasising the moral authority of the man who gave up his life rather than give up his beliefs.

Founded by the Holy Roman Emperor and Czech King Charles IV on April 7, 1348, Charles University is the oldest university in Central Europe. The very first lectures were given in various churches, monasteries and private flats. Afterwards, the son of Charles IV, Wenceslas IV, bought three houses in the city centre for the purposes of the university. In addition, a new university chapel and a big hall for ceremonial assemblies (Aula Magna) were built. In 1611 the new complex, known as the Carolinum, became the central building of Charles University. The history of the Carolinum is closely connected to Czech history and of course also with great names, Jan Hus being among the most prominent. Nowadays, Charles University is in possession of many buildings throughout the whole city, and the Carolinum remains the seat of the rector.

Formerly a Jesuit college established in the former Dominican monastery of St. Clement between 1653 – 1723, this is the largest complex of buildings in Prague after the Prague castle. The Church of St. Clemens and the Church of St. Salvator are included in its parts. When the Jesuits had to leave Prague in 1773, the Clementinum became the seat of the Prague University and the National library. Concerts are often held in the Mirror Chapel.

The Prague Jewish quarter is one of the most exciting places in Prague. Its rich history which covers more than 1000 years, gives you an excellent picture of the life of Jews in Europe. From the 9th century, Jews have played a significant role in making Prague one of the most interesting places in Central Europe. The many monuments that have been preserved reveal the prosperity and intellectual vigor of Prague’s Jewish culture. Visitors can admire five synagogues, the Ceremonial Hall and the Old Jewish Cemetery. (http://www.jewishmuseum.cz/)

Ancient legends situate the original seat of the Czech princes – the legendary Princess Libuše and the first Premyslides – on the hill. In fact, however, this fort was not founded until the Prague Castle was already in existence, since it dates back to the mid-10th century. In the latter half of the 11th and in the 12th century Vysehrad was the Premyslides princes᾽ main residence which brought about significant building activity within its walls. Among the noteworthy sights there are the precious romanesque rotunda of St. Martin, the gothic church of St. Peter and Paul (rebuilt in the neogothic style in the late 19th century), the Vysehrad cemetery (used as a burial site of the Czech outstanding personalilties, among them Antonín Dvořák, Bedřich Smetana, Alfons Mucha, Ema Destinová and Karel Čapek), and the underground catacombs which house the originals of several baroque statues from the Charles Bridge. It is a really nice place for a walk as it offers amazing views of the centre of Prague and the Prague Castle. 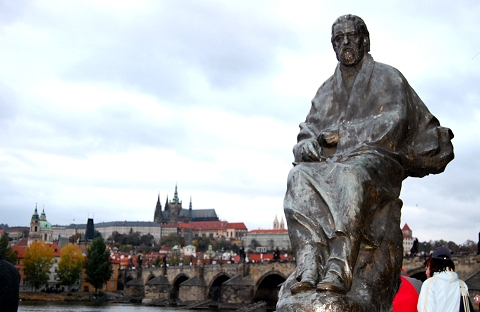