Giancarlo Grossi is a post-doc researcher in Aesthetics 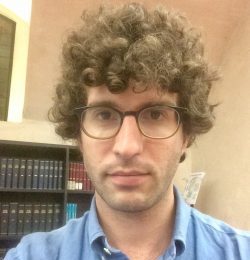 in the Philosophy Department of the University of Milan. His research interests concern the relationship between visual culture, media devices and mind sciences. His later studies focus on the relationship between immersivemedia and aesthetic experience from an archaeological point of view. He has published several articles in scientific journals and a book: Le regole della convulsione. Archeologia del corpo cinematografico [The Rules of Convultion. Archaeology of the Cinematic Body], Meltemi 2017.

Since around 2015, international broadcasters have begun to adopt an information strategy that uses new technologies and has been defined as “immersive journalism” (IJ). In particular, IJ refers to various types of 360° videos, VR shots and CGI reconstructions of events made to inform about a specific topic. In addition, VR director Nonny de la Peña has theorised the possibility to involve the user directly inside the event through the apparent removal of any narrative mediation of the reporter. A good example is Scenes outside the Bataclan of the BBC, shot on-site three days after the Parisian terrorist attack in November 2015, which takes the form of a news report.
Video and audio immerse the viewer in a context that makes her feel present. But is this process so unmediated, or does it respond to precise strategies of a ubiquitous mediation, so much present to become invisible? And is it possible the elaboration of complex historical traumas by the sudden immersion in the event detached from any narrative comprehension? In this presentation, we will question the ideological implications of immersivity in its attempt to make the historical truth of conflicts immediately tangible and catchable.